Choosing a non-mainstream technology can seem like a risky decision. When the technology is ideally suited to the task at hand, the decision becomes the start of a competitive advantage.

Some of it uses are in telecoms, banking, e-commerce, computer telephony and instant messaging. Erlang’s runtime system has built-in support for concurrency, distribution and fault tolerance. (erlang.org)

That’s quite a mouthful!

Let’s pick out some key words which are especially relevant to IoT:

I’ll illustrate their importance by discussing a demo platform for ingesting sensor data.

To set the scene somewhat, the demo platform will implement the following features:

The following diagram describes a successful communication session for a physical device with 10 samples of sensor data to send to it’s digital counterpart.

The communication session above comprises of 5 types of message. The physical device and the digital device share a common understanding of each messages’ structure. For example, they both know that the first 8 bits will always represent an integer that can be used to identify the type of message (arbitrarily called message_type). This is the reason for the lack of ambition I mentioned, as an 8 bit integer only has a range of 0 to 255.

The protocol has a strict flow of messages, both the physical device and the digital device are maintaining their own copy of the state of a communication session. For example, which message is next due to be sent or received and by whom.

The following table describes the purpose of each type of message.

Being able to design communications protocols as complex as business requirements necessitate is all well and good. But how does Erlang make them easy to implement?

As such Erlang has some unique optimisations.

Consider a contrived analogy regarding spoken languages. German (or other languages featuring noun genders) has an advantage over English.

Take cutlery as an example. If you have a spoon, fork and knife in front of you and you want to pick one, in English you can only say “I take it”. This is ambiguious, what does “it” refer to?

In German (for reasons unclear to me!) a fork is feminine, a spoon is masculine, and a knife is neutral. Which means you can say “ich nehme sie” (“I take her”), “ich nehme ihn” (“I take him”) and “ich nehme es” (“I take it”) respectively. As there are no other gender conflicting nouns in the cutlery context, the ambiguity is resolved. To achieve this in English we would need to add the noun, “I take the fork” etc.

People don’t tend to complain when something just works. Ericsson designed the first version of Erlang in the 1980’s and in a recent news article revealed they still use it today in their network solutions to carry an estimated 40 percent of all mobile traffic worldwide. When it does fail, it makes the national news. This is probably because for the vast majority of the time it works perfectly in the background without failure, or at least without noticeable failure (which is an important distinction).

The late Joe Armstrong (Erlang’s creator) writes that Ericsson’s flagship project (the AXD301 switch) had over 2 million lines of Erlang and achieved a staggering nine nines reliability (99.9999999%!). Erlang features isolated units of execution, known as processes, that communicate via message passing. These processes are incredibly lightweight, with a single server able to run tens of thousands of them. Processes, either singular or in groups, can be monitored by other processes and restarted with varying strategies when failures occurs. Erlang embraces failure as inevitable, and provides tools to recover.

Architecting a system in Erlang is essentially a case of designing how processes and process groups interact, fail and recover. The design options are broad, but at a high level one process per physical device is idiomatic. At a level lower, the following diagram illustrates the process design employed by the demo platform. 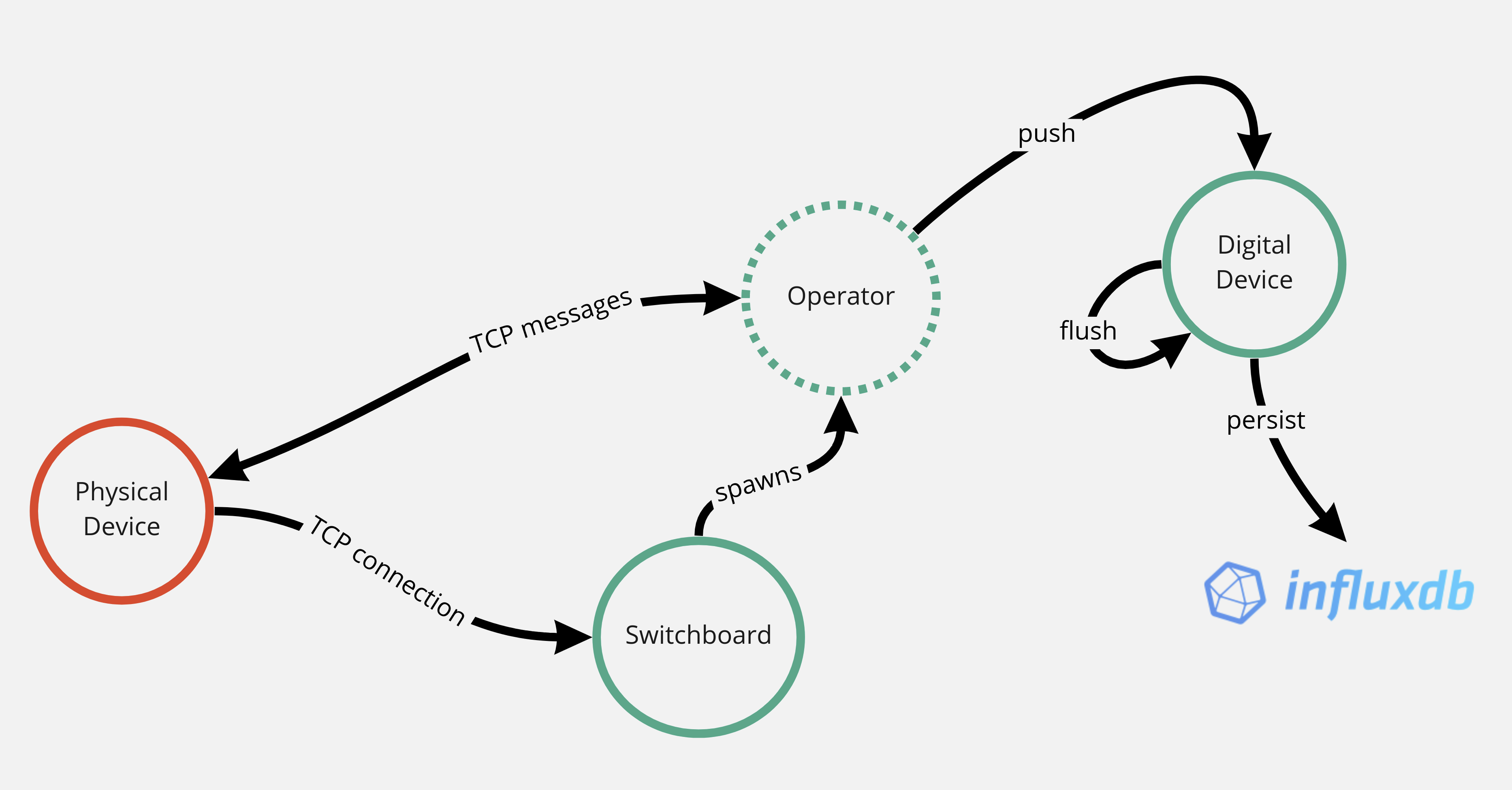 A call centre is a perfect analogy of the demo platform. The device makes a connection, which in the first instance is handled by a switchboard process. The switchboard’s sole responsibility is to accept incoming connections, bring to life an operator process and hand the connection over. The operator lives only for the duration of the connection with responsibility for transitioning through the communications protocol, finding the digital device and pushing data samples to it. The digital device caches the data samples and periodically flushes them to an underlying timeseries database.

This design has fault tolerance baked in. If the switchboard process fails, it is immediately restarted, and all that could be lost is a single incoming connection. If an operator process fails, only one communication session is lost, where the unfortunate physical device can try again on it’s next connection attempt (scheduled or ad-hoc). Communication sessions for other physical devices remain unaffected. The digital device involved is also unaffected. This is key as the business value derived from ingesting the sensor data is likely to be based on modelling atop a stable set of digital devices!

Whilst there’s plenty more I could cover, that’s about it for now. Hopefully I’ve conveyed some of the key benefits to using Erlang for IoT platforms, such that you’re encouraged to learn more. If you’d like to do that or take a look the demo platform in action, please reach out to me on mike@crudbetter.com.